Stephen Totilo: ‘Gaming takes over everything’

Video games will move to the center of the entertainment and pop-culture universe next year.

Why it matters: Streaming services, Hollywood studios, tech giants — even the Saudi government — are racing to capitalize on gaming’s vast and ever-expanding popularity, and its lucrative intellectual property.

Between the lines: This is what happens when a subculture has been deepening its roots for a half-century.

The bottom line: From World of Warcraft to Wordle, it’s a game-lover’s world.

I’d been thinking a lot about why my blogging on Zero Counts has steadily slowed down. A lot of it has to do with the a busier work-life. Some of it has to do with my duties as a new parent. But I can’t help to think that it’s simply harder to have unique takes on games and the games industry, and for good reason. Not only has the mainstream popularity of gaming skyrocketed, but so too has solid coverage from mainstream media — Totilo (formerly of Kotaku) writing for Axios as an example. I touched on this one year ago in ’NYT: Making Video Game History‘.

The odd bits of coverage I found in mainstream media was an inspiration for Zero Counts. I captured what I could to elevate said pieces, but I didn’t feel the gaming space was being covered in a way I wanted to see. I’m no business expert, but I did what I could to fill the gap. Now video game coverage from top-tier veteran games journalists, critics, and analysts is ubiquitous at major media outlets. Meanwhile, traditionally games focused outlets seem to be leaning into the surrounding media (movies, tv, anime, comics, conventions, etc.) more than ever, which makes sense seeing that media at large is incorporating more and video game IP into it’s catalog.

None of this is a bad thing. In fact, quite the opposite. I love how big this hobby of mine has become. It’s important. It influences so much of the world around us from technology to entertainment to education to culture to art, and it’s not getting smaller. There is obviously a huge dark-side to Big Business — “elites elbow in” creating “an establishment that needs to be challenged” — I’m just glad (read “hope”) press coverage has grown to a level to hold it accountable.

Or perhaps this new father who grew up with gaming is just happy to see the medium proliferate, is optimistic about the new generation, and was giddy to see this piece published on his birthday. Through conversations with accessibility experts and incredible organizations like AbleGamers, SpecialEffect and Stack Up, we’ve designed a highly configurable controller that works in tandem with many third-party accessibility accessories and integrates with the PS5 console to open up new ways of gaming. It is built to address common challenges faced by many players with limited motor control, including difficulty holding a controller for long periods, accurately pressing small clusters of buttons or triggers, or positioning thumbs and fingers optimally on a standard controller.

This is the most exciting news I’ve seen out of CES this year.

The design of Project Leonardo is radically different from the Xbox Adaptive Controller. The sheer fact that hardware itself is highly customizable, from physical button layout to analog stick distance and size, let alone the ability to map buttons together and pair this device with a DualSense for individual comfort or collaborative, assistive needs, the combinations are seemingly endless. I’d be stunned if some curb cut effects don’t come out of all of this flexibility.

“Because players can customize Project Leonardo according to their needs, there is no one ‘right’ form factor. We want to empower them to create their own configurations. The controller can also flexibly accept combinations of accessibility accessories to create a unique aesthetic. I am excited that the design will be completed through collaboration with players rather than presenting them with a single form factor.”

Competition fuels innovation, and the accessibility space can never receive enough innovation. I’m eager to see the informed reception and comparisons between Project Leonardo and the Xbox Adaptive Controller, and how accessibility in gaming evolves from here.

Perhaps foolish, but I find it inspiring when creators invest in their fandoms to breath new life into beloved franchises. I don’t know if or how projects like this survive, but I’m certainly rooting for it. Worst case, I hope this catches the attention of Capcom and these folks get picked up for their talents.

Something dissonant about the way that my Twitter feed is currently fully in desperation over the terrifying critical injury of Damar Hamlin, a 24-year-old football player, on a field in Cincinnati—a communally-experienced condemnation of the NFL—and how my feed here is… just not? I want to leave that place with an urgency, but the transition is teaching me a lot about network effects and the nuances of specific communities and the intention of spaces and I mostly just want that kid to be okay.

My heart goes out to Hamlin and his family. The footage is ghastly.

Had I not followed Yee on Mastodon from Twitter, I fear I would have no idea about this heartbreaking injury in such a timely and communial manner. I don’t follow sports much, and seemingly I don’t follow many sports enthusiasts on Mastodon. For as much as I praise Mastodon’s tech and positivity, the insight into periphery or even foreign communities through Twitter’s algorithm, its large userbase, and (dare I say) its “town square” ethos was a huge draw for me. I felt more informed about topical stories on Twitter than I do on Mastodon. This is a chilling insight from Yee.

Excuse my lack of preamble, but she is without a doubt my most favorite part of 2022.

It’s very hard to describe the joy that courses through my entire mind, body, and soul every time I see her. I’ve wanted to be a father for as long as I can remember. But hours before she was due, I had this paralyzing fear that some damaged part of my brain would about-face and reject the pride of parenthood. Thankfully, I was very wrong. The second I heard her cry, my heart burst. It was one of the greatest moments of my life, and things only got better. I discovered an incredible force of nature. Instinct took over. I immediately knew exactly how to care for her; how to protect her. And not only her, but my wife who had just endured the incredibly invasive and major surgery of Caesarean section — common, yes, but it will lay out strongest person.

Caring for both my wife and daughter

For the three days we spent in the hospital, I was on constant watch for my family. The second my daughter cried for food, I was awake and ready. Every moment my wife asked for help out of bed or for a breakfast burrito, I was there. I yearned to support and care.

Prior to leaving for the hospital, I had packed my bag with books and video games, none of which I touched post-operation. I found the experience of “being there” riveting. It was the most present I’ve felt in a long time and I’ll cherish it for as long as I’m able.

(Favorite) Games of the Year

For nearly 15 years, I was a heavy Twitter user. I made connections with many people I felt I had no business connecting with, found my tribe, and boosted my blog’s reach through some fortunate retweets and endorsements. And I tweeted a lot. But the act of tweeting began to feel more like an addiction and ephemeral than something of value. It was far from the feeling I get when I write a blog post, which was becoming fewer and fewer by the year. Once Elon Musk took ownership of Twitter, I bolted. I deleted all of my tweets, more or less bid adieu to the platform, and leaned into the Mastodon account I created in 2018. And it feels fantastic.

Since November 13, 2022, I’ve been monitoring my social media Screen Time: 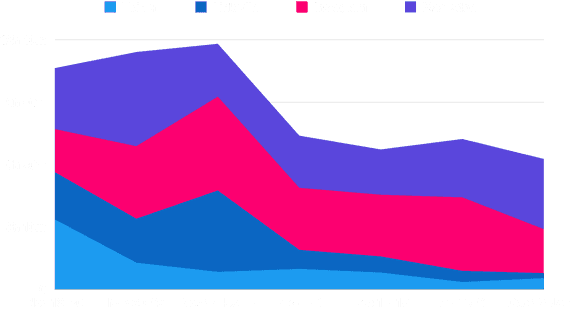 I find these results shocking. Not only have I reduced my overall social media usage, but dropping Twitter was much easier than I thought it would be thanks to a wide adoption of Mastodon from many folks in the communities I take part in.

While my time engaging with Mastodon is on the rise, that’s not due to an algorithm. It genuinely feels like a healthier, friendlier social-network. And the decentralized nature means my content won’t just disappear.

In small part, I owe Musk thanks in prompting me to have a healthier relationship with social media. In large part, I owe Mastodon for being there when the rug of a centralized platform was pulled out from under its users. A brilliant technology at the right time.

If you’re unfamiliar with Mastodon or think it might be too complex, check out Brendon Bigley’s “How to Use Mastodon” explainer at his blog, Wavelengths.

I received my Analogue Pocket in 2021 and loved it then. But in 2022, its firmware was updated to unlock the FPGA technology inside to developers. Through this, multiple open-source “cores” have been released for the device including cores for NES, SNES, Genesis, Game Boy, Game Boy Color, and Game Boy Advance, amongst others.

These cores have changed my relationship with emulation and 8- and 16-bit retro gaming in general. Being able to hardware emulate my catalog of NES, SNES, and Genesis games and take them on the go is a childhood dream realized. In the early to mid ’90s, the best we could get was a Game Boy or Game Gear with slimmed down games, grayscale graphics, and/or poor battery life. Honestly, most of those experiences were great, but they paled in comparison Super Mario Bros. 3 on the NES, The Legend of Zelda: A Link to the Past on the SNES, or Sonic 2 on the Genesis. We just wanted to carry those experiences in our back pocket. And now we can. At a hardware level. The future.

I’ve been missing out on PC gaming for some time. With the Steam Deck, I can finally enjoy classics like Half-Life 2, Halo, Mass Effect, etc., etc. On top of that, the ease of emulation through the Steam Deck is remarkable. While the emulation is not operating at a hardware level like the aforementioned Analogue Pocket, I am able to quickly load-up 3D favorites from PS2, PS3, GameCube, Wii, and many other consoles of yore. The Steam Deck is a wonderful companion to my Analogue Pocket, a great current-gen console (in handheld form!), and a hopeful glimpse into the future of handheld gaming.