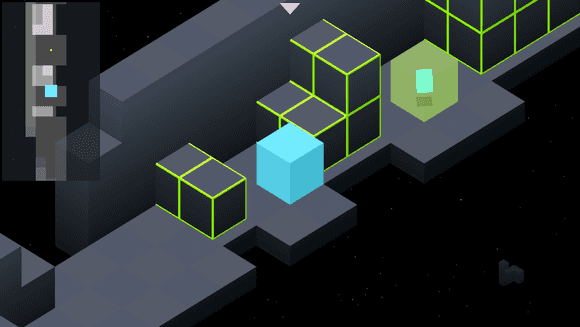 What is seemingly simple on the outside may spike your nostalgia on the inside.

Like many, I am often guilty of falling head over heels for media that pays homage to my childhood hobbies. In the case of video games, very few have been able to tap into my childhood gaming roots like that of Mobigame‘s EDGE Extended. While the game may be an additive to the original EDGE, it succeeds as its own title.

EDGE Extended’s core objective is to move your cube from point A to point B as quickly as possible without falling off of the edge of the level, all the while collecting prisms on the way. Your cube’s movement consists of crawling along the ground or scaling other cubes of the same height within a level’s layout. Boundaries are not forsaken therefore one false move could put you over the edge, racking up your death count, and harming your final score.

Level scoring ranges on a scale of A to D with special S (Professional) and S+ (EDGE Master) rankings based on completion time, prisms collected, and number of deaths (or lack thereof). Hang-time bonuses are given when the player holds the balance of their cube during mid-climb without completing the climb completely, a la manuals/grinds/plants in Tony Hawk’s Pro Skater.

Each level offers a unique design and mechanics that keep the player riveted and guessing. The rate at which this simple 3D game is able to innovate is mind-blowing, offering unassuming players nostalgia of their first play through of Super Mario 64. Many popular platforming mechanics are aplenty throughout each level such as triggers that open bridges, temporary floors, shadow cubes, and even a Morph Ball-esque ability that provide additional challenges in reaching the each level’s goal.

EDGE Extended’s visuals are reminiscent of the original TRON: blocky, greyscale level design sprinkled with lines of glowing hue. At initial glance, the game may seem a bore, however it’s perfectly timed moments of shimmering colors send the mind racing back to a time of ’90s-era sparkly stickers and Lisa Frank products, perfect for today’s aging gamer.

Simply put, the sound design is sharp and smart. A plethora of shimmering chimes move the player through the menus while the soft cushioned thud of the cube satisfies the auditory sense. If that is not enough, the EDGE Extended soundtrack pays homage to the 8/16/32/64-bit melody heavy video game scores of yore such as Sonic the Hedgehog, various menu music, and Super Mario 64 (I may be obsessed with this game…).

EDGE Extended is a love letter to historic platformers, memorable mechanics, and the video game music of yesteryear in the form of a casual iOS game. EDGE Extended is a game worthy of a $30 price-tag offered for only $3!

EDGE Extended is available for iOS on the App Store.