Disney wouldn’t see Nintendo as a hardware company or even a software company, just as they didn’t see Marvel as a comic book company. Nintendo holds some of the best intellectual property in the world, from Mario to Link. Kids are still wearing Mario and Luigi shirts next to their classmates wearing Minecraft and Iron Man logos.

There are incredible properties, from Metroid to F-Zero, that would offer Disney huge opportunities in everything from film to theme park attractions. Nintendo, when looked at through the lens of an acquisition, is a bundle of amazing, well-known characters and worlds that are criminally underused.

Nintendo is the last company that owns characters that could compete with the worlds that Disney already controls, and adding Mario to the Disney original characters, Marvel superheroes and Star Wars would mean that Disney all but owns entertainment as a whole.

I initially scoffed at this article as a pipe dream so many of us have already had (especially yours truly), many after watching Wreck-It Ralph. One could sketch Nintendo franchise themed rides over a map of Disneyland. (Peach’s Castle in the hub, Metroid and Star Fox in Tomorrowland, Fantasyland becomes Hyrule, Donkey Kong in Adventureland, etc.) We have all certainly envisioned a reboot of the Super Mario Bros. Super Show using Super Mario 64 to current era models, worlds, and voices(?). Of course this sounds awesome/mind-blowing/impossible.

But then the reality of it all hit:

It was as if I had never really given weight to the thought. Nintendo has always been so evident and ripe to fit along classic Disney franchises. But Marvel and Star Wars? Put in the context of Disney buying Nintendo and Nintendo just seems like a no brainer put up against the other two.

On the flip-side, the majority have been spelling doom for Nintendo for years. And Nintendo has been putting up one hell of a fight. Let’s see how these Super Smash Bros. numbers do.

[UPDATE]: How about that ad to the right of the piece? 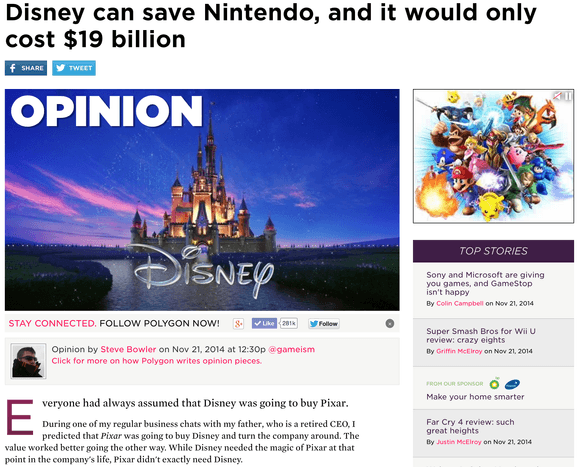