Patricia Hernandez in her review of Mario + Rabbids Kingdom Battle for Kotaku:

The game’s zones are numbered similarly to Super Mario Bros.’ in that there are worlds sectioned by levels—1-1, 1-2, and so on. Each area has its own Pixar-esque landscape, all themed in the most video-gamey way possible. Fire and ice world! Lava world! Obligatory starting-area-basic-forest world! It all seems crafted from clay. I don’t think I saw a sharp edge throughout my adventures; that cartoon aesthetic, combined with the top-down camera, made me feel like a kid mashing together dolls from different sets.

You can poke and prod some stuff around the overworld—there are some light environmental puzzles, and coins to collect—but just looking around is a joy. The haunted world, for example, is dotted with Boos, pipes stuffed with candles, and turbulent waters squeaking with rubber duckies. You move through these worlds controlling a party of three characters. I would run through everything and watch in awe as Mario stuck his arms out at top speed, Rabbids trailing behind him maniacally. The characters’ animations oozed so much personality that, dozens of hours in, I still stopped to appreciate them.

This echoes similar sentiments I published in my E3 recap:

Mario + Rabbids Kingdom Battle is the game I’m most looking forward to. It’s gorgeous and surprisingly deep. I can’t recall ever seeing the Mushroom Kingdom in such detail.

I waited two hours to play 16 minutes of _Mario + Rabbids Kingdom Battle _at E3. Madness. But as crazy it was, the immaculate detail of the game’s Mushroom Kingdom saved me from feeling it was a complete waste of time. Simply stunning. 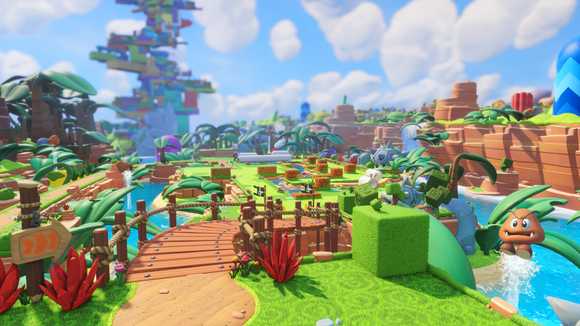