This review covers the core game, which — arguably — may not be considered the “core” game. 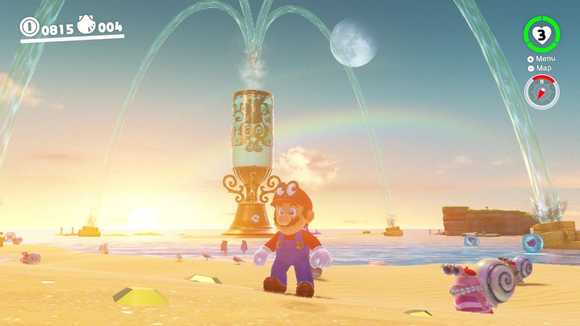 Everyone loves a Mario game. Polish, charm, fun. Mario games are a barometer of execution for each of Nintendo’s console generations. Where they don’t push boundaries of graphical fidelity or online community, they shape design language, innovation, and soul within the confines of a familiar world.

For the Switch, the promise of a high-fidelity, 3D, sandbox Mario game akin to _Super Mario 64 _has whetted the appetite for many a fan since its reveal in January 2017. It’s big. It’s beautiful. It’s Mario. It’s everywhere.

But is it familiar?

I had the opportunity to preview Super Mario Odyssey at E3 — an excerpt from my E3 experience below:

Odyssey feels like the perfect amalgam of all 3D Mario adventures: The playground of Super Mario 64‘s introductory courtyard, Super Mario Sunshine‘s NPCs, Super Mario Galaxy‘s inventiveness, and Super Mario 3D World‘s fidelity. Above all, there is a “weird” factor that has been generating buzz. The various worlds Mario can travel to feature a variety of art styles: the playable New Donk City feels like a Tony Hawk’s Pro Skater / Sims hybrid while the Sand Kingdom felt like a traditional 3D Mario world with a new classic 2D side-scrolling mechanic added to the mix. (Think The Legend of Zelda: A Link Between Worlds.) The game played as great as you can imagine, but the real allure is looking forward to the variety and trying to figure out just what the hell is going on!

It’s this last (emphasized) phrase that I’m struggling with. At E3, I thought I was playing a sample of the complete game. I was sure there was something in the game that would tie the experience and aesthetic of the kingdoms together. Unfortunately, the worlds feel as disconnected as my preview experience.

Even for a franchise about an (ex-)plumber in a fantasy land inhabited by mushrooms and turtles, the story is bonkers. A captured Princess Peach is being forcibly wed to Bowser. Bowser is on a quest to find wedding hallmarks (a ring, a cake, etc.) while his wedding-planning henchmen, the Broodals, stave off Mario. The player is thrown into this storyline via an opening cinematic: Mario plunges to his doom from Bowser’s airship, his iconic hat shredded to bits in the blades of the airship’s motor. Wake to find Mario in a strange, noir themed world and introduced to his new sidekick Cappy. Then, the player is off on an adventure to stop Bowser. 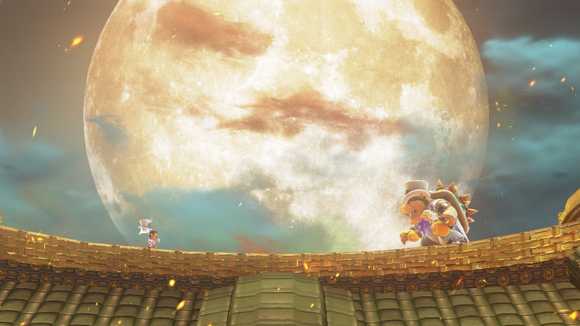 From the start, something feels off. It’s disorienting not to kick off in Mushroom Kingdom, solely as a frame of reference. As Mario progresses from kingdom to kingdom, it’s not clear how these aesthetically diverse worlds fit into the once familiar Mario universe. While that’s likely the point, they never quite feel like “Mario”.

To progress from world to world, the player is expected to collect a certain number of Power Moons to power Mario’s airship. While there is a clear target of power moons to collect, it’s never clear if the player should collect as many as possible now or if there will be an opportunity to collect later.

I’m not a completionist. If anything, I’ll blaze through a game as quickly as I can to relate to the zeitgeist. The idea that Super Mario Odyssey _rests on the principle of collection is — dare I say — infuriating. Sure, collection is a core tenant of _Super Mario 64. However, its hook comes from a limited but achievable set of 120 Power Stars as rewards for solving puzzles and riddles within the game’s 15 stages. However, Super Mario Odyssey falls “short” due to abundance — 999 Power Moons spread across a like 15 stages.

It quickly becomes apparent that collecting is the name of this game. Beyond power moons, there are outfits and airship decor to purchase with two types of coin — gold coins as generic, globally accepted currency; purple coins as world specific currency. Purchasable items match the flavor of coin. Outfits purchasable with gold coins are easier to obtain and can be purchased anywhere in the game, while those only purchasable with purple coins require the player to search each world high and low for every specialty coin. Outfits and decorations provide no value outside of aesthetic, but the idea of collecting them sinks its hooks in nonetheless. As for the airship decor, I was not clear what it was initially. In fact, I hadn’t purchased my first one until New Donk City. 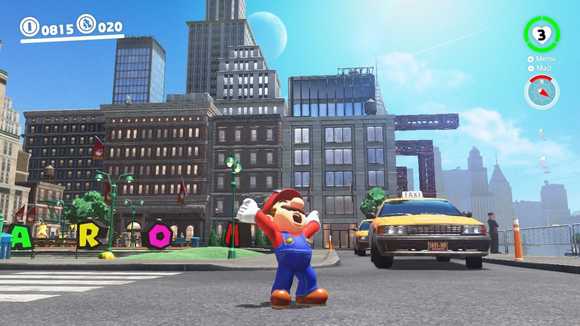 Ah, New Donk City — Mario’s foray into a world populated by actual humans(?) It’s as wild as it sounds, but somehow, it is the most comfortable of the kingdoms the player visits. As mentioned above, the Tony Hawk / Sims vibe makes this concrete jungle surprisingly welcoming. So much so that I found myself trying to complete every little task in the world before moving on — something I hadn’t tried in worlds previous and quickly dropped afterward.

It wasn’t until New Donk City — 8 kingdoms in — that I felt like I understood the game on an objective level. While it’s difficult to put my finger on what felt different, I understood objectively what needed to be done, how to do it, and what to look for. New Donk City feels as welcoming as Super Mario 64’s courtyard. It provides the opportunity, aesthetic, and space to mess around; to get comfortable. I can’t help but feel New Donk City should have been the first full world in which Mario travels. By wholehearted breaking the art style of Mario games past, it communicates that Mario isn’t in Kansas any more — things are going to get weird. But, it’s a safe space. The platforming opportunities abound go a long way to bridge Mario games of yore into Odyssey and get the player comfortable with the mechanics and core controls. It is the prize of Super Mario Odyssey.

Until New Donk City, I felt like I was tip-toeing throughout the game, afraid to miss something important. Something wasn’t clicking, which is a sour experience for a Mario game. At it’s core, Super Mario Odyssey is awful about communication. It does not communicate what’s necessary, what’s optional, and of the optional, what is what.

After a week away from the game, New Donk City is what I keep coming back to. I only wish New Donk City was larger. It’s a wonderful playground and an iconic area players will remember. My only hope is that Super Mario Odyssey _— like _Captain Toad: Treasure Tracker — is an expansion of what we know of the Mushroom Kingdom, or at least the universe in which it inhabits. I hope this is a taste of what’s to come for the Mario franchise — the characters and worlds introduced — or else what’s the point? 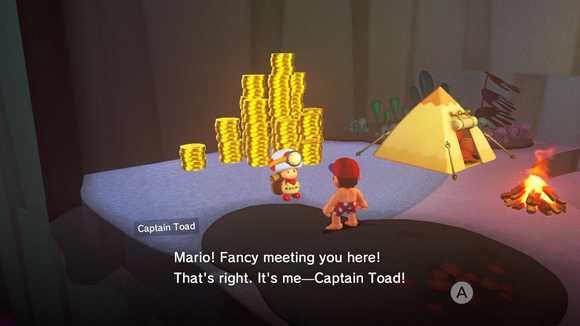 While playing, I strayed away from many reviews and opinions. Afterward, I needed validation that I wasn’t crazy — that Super Mario Odyssey is very, very good, but not great. That something was off. I found solace from Justin McElroy on Polygon’s Quality Control podcast:

It is hard to find — these days — a game where “progression” is not a large aspect of it. At least in the games that I find myself playing a lot. Almost every game has some sort of in-built role-playing system where you’re getting better, you’re getting more powerful, you’re collecting more items, you’re collecting more Pokémon — you’re building a stable of those — you know. There’s a sense of progression.

For me, I weirdly felt myself not incentivized to play more Mario. Like, I enjoy my time with it, but I don’t find myself… hooked. And I think it is because of that — because you can hunt down a bunch of moons in an individual level. But in the end, I don’t feel stronger or that I’ve accomplished more, necessarily.

Super Mario Odyssey is beautiful, charming, and expertly crafted — possibly the most polished and well designed game I’ve ever played. But the desire to jump back in never took hold. Beyond New Donk City, I wasn’t particularly enchanted by any of the other worlds and found myself rushing through the game. That said, mid-way through, I’d begun hearing whispers of something amazing waiting at the end of the game.

Truth be told, the end delivered. All of the charm and soul I had been waiting for came to a head. A smile spread across my face — the same smile I imbued upon booting up this new Mario adventure for the first time. I only wish that smile had maintained throughout my experience with Super Mario Odyssey.