Fortnite players who had an Epic account on PS4 and have tried to play the new Nintendo Switch version of the game are reporting that they’ve run into a problem: they’re not allowed to use the same account.

That’s right, if you have played the game on PlayStation 4—even just once—that’s enough to have got your account locked to that system. It goes the other way too; if you link your Epic account on Switch, you’re locked out on the PlayStation 4.

This is maddening, but it comes as no surprise. To Sony’s credit, cross-network/crossplay is fairly new to the console world. That said, as I noted in my piece Sold on Cross-Network Play, “this is not a technical limitation. It is political.” The fact that Fortnight crossplay is supported across Switch, iOS, Android, Xbox One, macOS, and PC tells you as much.

In Cross-Network Play is “the Next Logical Step”, I noted the following:

Sony claims their reluctance of opening cross-network play is out of protection of their community. I think that is a fair stance, but is the Sony community any less toxic than others? I think the real fear is losing an amount of ability to lock in players to PlayStation 4. It’s the same case made for exclusive games and content; the latter I vehemently oppose.

Looking at Sony’s sell through numbers, it’s easy to see where their comfort of lock-in comes from. They likely have an overwhelming majority of the console base on their platform. Here’s a visual from my piece Some Numbers that Illustrate Nintendo’s Switch’s Massive Success: 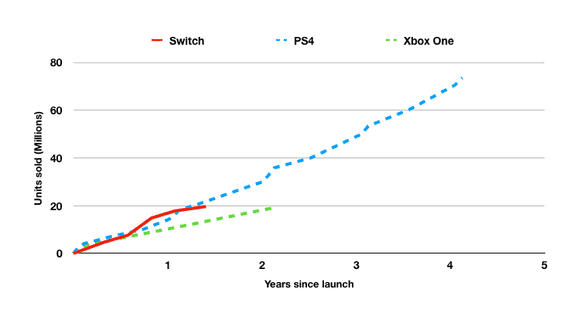 Sony is going to run that lead dry of loyalty to their platform.

But the majority of consoles aside, the masses are playing Fortnight. And if they aren’t on PS4, they are everywhere else. If that’s not enough for Sony to about-face, I don’t know what is.