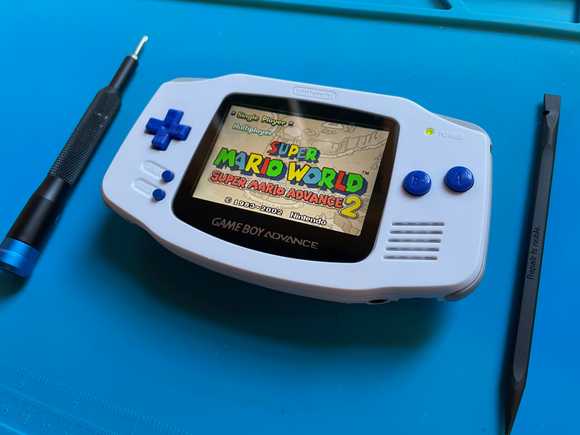 This is my first Game Boy mod. About six months into the pandemic, I had a hankering to play some old Game Boy Advance games; namely Final Fantasy Tactics Advance. But I also had an itch to start an project that involved using my hands. Maybe the isolation behind a computer had gotten the best of me. Needless to say, I bought a functioning Game Boy Advance from DKOldies and an IPS display from FunnyPlaying and got to work.

For the first version of this mod, I carved out the necessary plastic to replace the display in the original shell. (The IPS displays are slightly larger than the original displays.) Unsatisfied with my trimming, I later decided to replace the shell with a FunnyPlaying after-market shell, buttons, and silicone. Any mods that required soldering would come later.