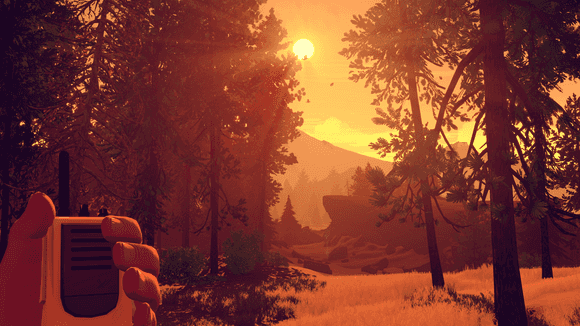 It goes without saying Firewatch is an aesthetic marvel. Just look look at the gameplay screenshot above. Better yet, head to firewatchgame.com and get your fill. But it’s what lies within the exterior beauty that Firewatch shines.

Without taking the Up-like blow out of the first act, the game finds protagonist Henry having taken a job as a fire lookout in Shoshone National Forest, Wyoming. Henry communicates with Delilah, a veteran lookout in another watchtower, via radio through choice-driven narrative queues (à la The Walking Dead, Choose Your Own Adventure). Shortly after the opening, the two find themselves tangled up in a self-provoked mystery.

Throughout my play-through, I became so concerned for Henry’s safety that my own certainty about the wilderness and its role as a haven for the unknown and unexplainable began to fulfill itself. However, it’s at the mercy of a few cheap tricks that this unsettlement is allowed to creep in. One early trick creates the suspicion that something bigger is going on and you’re the only one not in on the secret. Another instills the fear of looking down or turning a corner; two actions that become impossible to avoid and occur at breakneck frequency throughout the entirety of the game. Campo Santo makes it impossible not to feel anxious.

The answer to the game’s mystery will be unsatisfying, but only because this is the wrong puzzle. I’d argue the real answer is to why the game’s mystery is unsatisfying. Therein lies the revelation. Ultimately,_ Firewatch_ shows that one’s own ego and neurosis can overshadow important details; that our narcissism and persistence to seek the puppet-masters blur what is right in front of us. Without doubt, an interesting mystery unfolds for Henry and Delilah; but it’s an exposé in egoism that lies at the heart of Firewatch.