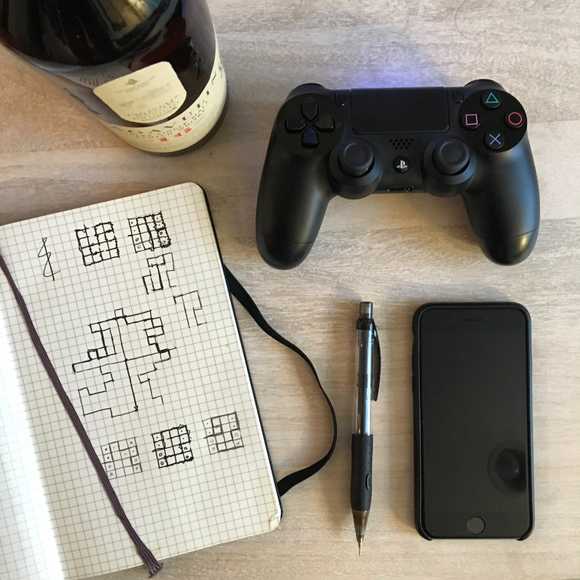 It started by “stumbling” across discussions about the game, convincing myself that I was listening to the Idle Thumbs podcast because I felt that it warrants my attention (true); not because The Witness was mentioned during a particular episode (false). Or because I hadn’t listened to IGN’s Game Scoop in months, missing a show that hooked me on video game related podcasts (true); not because The Witness was mentioned in a particular episode’s show notes (false).

Like many growing up in the late ’80s, early ’90s, I was a fan of Myst. The game took the adult world by storm and after my father and step-father both began discussing its puzzles with me, I felt I had something to offer these grown humans. I spent large swaths of time on a mysterious island, solving puzzles and eventually pouring over a strategy guide; a “book” I later convinced my 2nd grade teacher would serve well for a book report.

And boy, do I love The Witness. To a point.

You know, the thing about Braid: I loved it, I loved the atmosphere, I loved the visions, the softness of it. It kind of felt like a piece of silk you could run your hands through. It was a lovely, lovely game. But here’s the thing that didn’t work for me: It got so tough that my need and want to experience more of its world was absolutely challenged by my feeling that I wasn’t clever enough. I kept going back to find out more about the world, feeling more and more stupid. After a while, I thought, This game is dumb. Now I think I was wrong, by the way.

— Peter Molyneux, in an interview with Tom Bissell, Extra Lives

I’m sure I underestimate myself by thinking I would have never completed the game without a guide. The game thrives on the notion of beating the player down only to let them realize they could find the solution all along. There were plenty of times when I pondered giving up, only to persevere and surprise myself the following day. But after 215 puzzles and frustrating “Tetris” logic, enough was enough.

After weeks of setting the game aside for Firewatch, Tom Bissell’s “Extra Lives”, and Veep, the allure and curiosity of The Witness wore off. I was no longer itching to out-do myself. I just needed to know what the The Witness would amount to. Was the experience worth it?

Many reviewers point to discovery and breakthrough as the reward. That once the player is spoiled with hints, the spell is broken. While those moments of besting oneself are certainly empowering, I found cheating my way through the second-half to be enjoyable as well.

I was able to appreciate the full genius behind the game. Had I spent 20-100 hours attempting to slog through the insanely brilliant puzzles for weeks, months or years, there was still no certainty I’d finish the game. By cheating my way through The Witness, I was able to see and appreciate all of the ludacris and awe-inspiring puzzles throughout.

I don’t want to invest in a game that I’m going to put 200 hours in because I’m never going to put 200 or 100 or 50 or 20 hours into a game. I’m just not going to do it. But something like this, which is substantial to me, it’s longer than a movie but it doesn’t become a lifestyle either.

It’s very hard for me to spend 20 hours let alone 200 on a single game, as clearly evidenced by my quick drop off from games like Skyrim and Grand Theft Auto IV. Sure, I’m attempting to play through the entire Final Fantasy series, but it’s a repetitive mobile effort that I dip into for 20 minutes at a time. (You’re not missing much of a story in the first Final Fantasy to warrant consecutive hours of play.)

Lastly, experiencing The Witness’s devilish penultimate puzzle — two randomly generated, timed mazes of mixed logic intended to thwart cheaters — was a welcome surprise. As I closed in on the end of the walkthough, I was stopped dead in my tracks by a puzzle that could not be documented or shared. I was forced to figure this one out on my own. It certainly wasn’t the most difficult puzzle in the game, but it’s a puzzle that could only be appreciated (and likely solved) by someone who had learned enough to stretch their rusty two-week-old Witness muscles.

Oh, what a frustrating ordeal the penultimate puzzle must be for those who had decided to cheat their way though the entirety of the game; stopped short of victory at the 1-yard line. It would have been easy to overlook adding this trick, but is a perfect fit for a game that prides itself on using assumption to shoot-down the player’s knowledge. (Hats off, Team Thekla!)

The penultimate puzzle alone leads me to believe that Jonathan Blow and his team wanted a community to blossom, sharing hints, tips, and solutions across the global community. Why else would there be only one randomly generated puzzle? It suddenly made me feel less guilty for succumbing to a walkthrough.

Do I feel cheating spoiled the game for me? Absolutely not. That said, I strongly advise pushing oneself to the brink of insanity, solve the puzzle that brought you there, then do it a few more times. Understand the language of the puzzles. Only then will it be rewarding to experience the building of The Mountain, the final tricks, the puzzles within puzzles, and the tightly woven secret of the island. Only then will the player truly understand the frustrating brilliance of The Witness’s final puzzle.

Blow and the Thekla team put together an experience that will be talked about for years to come. And they took a very high risk placing the final puzzle where they had. The spiraling essence of zooming out to see the whole connected thought is a lovely thing. So much so that the idea that The Witness has players seeing puzzles in the real-world is completely legitimized.

Sure, all of this could have been said from a player who finished the game without cheating, and likely with greater appreciation and satisfaction. But I know I ended up a whole lot less frustrated yet still deeply satisfied.